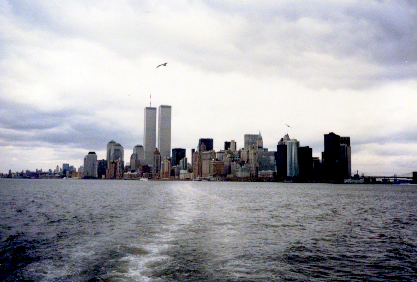 The Internet Infidels are all in a state of shock at one of the most disturbing manifestations of orchestrated evil since the Holocaust. I live in New York city, just four miles from where the twin towers stood. My wife Jennifer works in a building only forty blocks away. She is well, but had to be evacuated. All we could do is give blood. I had vivid nightmares last night about the horror the victims, both on the planes and in the buildings, must have suffered in the moments before their deaths. I now sit here in outrage at the callous lack of compassion and the evil-bloated hatred that has allowed human beings to commit such a crime, most likely, it would seem, for the Glory of God.

I would like to express the profoundest grief for all the victims and their families and friends, on behalf of myself and all of us here at the Secular Web. We have received condoling email from around the world expressing horror and sadness. As I walk the streets of New York, I am startled to see foreign tourists looking at me and other Americans, their faces filled with a sadness and concern that they feel helpless to express. It’s as if they wish to say something, to comfort us, but there is nothing to say. They feel as helpless as we do. The best I can do is pass this on to those truly hurt with loss by this tragedy: the world really does care.

I could harp on about how only a superstitious belief in immortality, only a backwards belief that the Will of God trumps all morality and compassion, would ever allow any group of men to fulfill every step of this task (apart from pure psychopathy). We have been battling evil here for years but never believed it would show so vile an excrement as this: the mass murder of thousands of innocent civilians. But there are more important tasks before us today: not merely to prevent it happening again by locating and cutting this cancer from the earth, but to negotiate the social contract once again for a new balance between life, liberty and the pursuit of happiness, and the need to defend these priceless treasures against suicidal murderers. But we should also stir our memory.

My wife took her album from the dusty shelf, and found some photographs she took of those towers a few years ago. It almost made me cry to look at them. To mourn and honor the dead, we will not publish here the images splashed on the front pages of every newspaper and now incorporated into every television news graphic. Rather, with no slight intended to the victims at the Pentagon and in Pennsylvania, I would like us to remember the World Trade Center towers for what they were: a glorious and incredible achievement that brought tremendous good to the world, a place of resilience and comfort and security. I reproduce Jennifer’s photographs above and below as a memorial to all those thousands of lives lost. 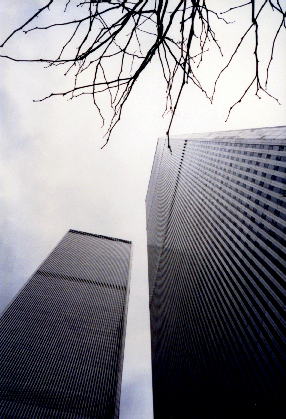 These buildings were an incredibly efficient and durable machine for the generation of economic wealth in an environmentally sound package: for by permitting the genuine equivalent of the entire population of a small city to work in one place, the pollution and environmental damage caused by transportation was greatly reduced. This was, almost literally, an entire city, with its own police department, stores and markets. The World Trade Center generated steady jobs for over fifty thousand people. Let no one scorn them as vain towers of Babel. These were good works.

They were also a testament to our forethought, our genius, our diligence, and our compassion, in every element of their design. Unlike many other nations that ignore or do not even demand laws for constructing buildings for safety and evacuation, the automated sprinkler systems no doubt delayed the collapse long enough to allow thousands to flee certain death through abundant and well-constructed stairwells. Indeed, had the planes not been loaded with over ten thousand gallons of jet fuel apiece for their intended cross-continental flight, the towers would likely still be standing: they were that well built. It was only the intense, sustained heat that weakened the metal supports, causing them to give way. As one engineer put it, you simply cannot build anything that could withstand that. But their construction saved the lives of thousands, partly thwarting the evil designs of madmen, and we would do well to remember that.

There is little more I can say. You will have heard it a hundred times already, but we urge everyone to give blood. I do not urge this because it is needed. Sadly, the number of survivors in need of blood is smaller than anyone expected. The disaster was that fatal. And the wave of donations across the country in the past two days will more than meet the real demand. No, I urge everyone to give blood as a symbol of solidarity and as a humanitarian act, thumbing your nose at those who would rather spill blood than give it. The world is always in need of an abundant blood supply. If it takes days to find a clinic that can accommodate the rush, that’s fine: the blood you give will be of good use nonetheless. It will help someone, somewhere in the world. And this will remind us of the most crucial truth: hands that help are far better than lips that pray.

Interested in publishing on the Secular Web? See the Submission Guidelines & Instructions.