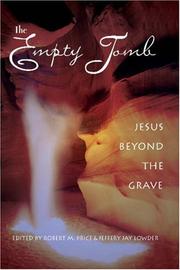 The Empty Tomb: Jesus Beyond the Grave

Contains three chapters by Richard Carrier, covering theories in great detail that the body of Jesus was stolen, misplaced, or raised only in the spirit realm.

Licona vs. Carrier: On the Resurrection of Jesus Christ

Recorded at UCLA before a crowd of half a thousand. Carrier defends his latest theories of how Christianity began, with slide shows and new evidence from the Bible.

I don’t buy the resurrection story. That would normally be all I need say. But I am routinely asked why. This collection of short essays serves to answer that question. There are many reasons I am not a Christian. My atheism is based on findings more fundamental than anything to do with particular religions, but the arguments in favor of the Christian worldview as opposed to any other are ubiquitous in my culture and always center around the historical claim that Jesus was raised from the dead. As an historian, expert in ancient Greco-Roman society, and with a good knowledge of Greek, I’m qualified to make a professional judgement in the matter. This essay explains why I find the Resurrection to be an unconvincing argument for becoming a Christian.

This project began in 1998 and has grown enormously with many new editions over the years, and my thanks go to all those who helped to improve it. The present edition, completed in 2004, updates and reorganizes all previous materials. My debate against Mike Licona at UCLA that same year adds even more perspective to my reasons for not believing Jesus was raised from the dead, as will three scholarly chapters I have contributed to an anthology due to be released next year. I also discuss more of my reasons in other online essays besides this one (see Note 1). Altogether, there are basically four so-called “naturalistic” theories of how the first Christians came to believe Jesus was raised from the dead: either he survived, or his corpse was misplaced, or his corpse was stolen, or the belief arose solely from epiphanies (as dreams, hallucinations, or inspirations from scripture), not from any missing or revived body.

Survival is the least probable (as I will demonstrate, the odds that this can explain the evidence are less than 1 in 700). Misplacement fits the evidence better than most scholars think, and theft fits the evidence even better still, though I only discuss these possibilities elsewhere (see Note 2). I think it is most likely by far that the original belief was derived from dreams, hallucinations, or “inspired” readings of scripture, which later became embellished into fabulous legends serving different dogmas. This could arise in either of two different ways: either a belief arose that Jesus had risen in the flesh, and all evidence to the contrary was dismissed as a trick of the Jews, or a belief arose that Jesus had risen into a new body entirely, leaving his old body behind–in which case there could not have been any contrary physical evidence. The latter I think is the most probable account of all (and I make a preliminary case for it here–while much more evidence and argument will be found elsewhere: see Note 3).

The three key reasons I reject the resurrection story that are elaborated here are these: (1) the evidence is insufficient to warrant belief in this case; (2) even survival (mistaken as a resurrection), despite being the least probable unmiraculous explanation, is more probable than a miracle; and (3) some evidence suggests the original conception of the resurrection of Jesus was spiritual in nature and did not involve his flesh (contrary to what some of the Gospels struggle to claim).

Special Note from 2009:This collection of essays is growing increasingly out of date, and I have no plans to update this collection any further. Though I’m not aware of anything egregiously wrong here, I may have changed some of my views or understanding of the methods and facts in the intervening ten years since this collection first began. My most recent published work (in print and online) should be considered as superseding anything it may contradict here, and the following materials should be used with that caution in mind.

Note 1: I have discussed some of my reasons for rejecting the resurrection story in other essays besides this one, and in three chapters I contributed to the book The Empty Tomb: Jesus Beyond the Grave (2005), including “The Spiritual Body of Christ and the Legend of the Empty Tomb” (pp. 105-232) and “The Plausibility of Theft” (pp. 349-68). For works online see: Jewish Law, the Burial of Jesus, and the Third Day (2002), which was significantly updated in The Empty Tomb (pp. 369-92); Review of “In Defense of Miracles” (1999), especially sections 4b (Geivett’s Exercise in Hyperbole) and 4e (Craig’s Empty Tomb and Habermas on the Post-Resurrection Appearances of Jesus); Review of “The Homeric Epics and the Gospel of Mark” (2000); Thallus: An Analysis (1999); Osiris and Pagan Resurrection Myths: Assessing the Till-McFall Exchange (2002); and Kersey Graves and “The World’s Sixteen Crucified Saviors” (2003). And more are always being added to my Secular Web Index.

Note 2: These two possibilities (misplacement and theft) I do not discuss here, but I do discuss them in separate chapters that I contributed to the book The Empty Tomb: Jesus Beyond the Grave (2005), in “The Plausibility of Theft” (pp. 349-68) and “The Burial of Jesus in Light of Jewish Law” (pp. 369-92). Those chapters are significant updates to my preliminary case for misplacement in Jewish Law, the Burial of Jesus, and the Third Day (2002), and my preliminary case for the plausibility of theft in “The Guarded Tomb of Jesus and Daniel in the Lion’s Den: An Argument for the Plausibility of Theft,” Journal of Higher Criticism 8.2 (Fall 2001), pp. 304-18. I have also composed FAQs for those who have read The Empty Tomb and still have questions: Burial of Jesus FAQ and Plausibility of Theft FAQ.

Note 3: See the video of my UCLA debate with Mike Licona or, better yet, the far more detailed chapter on the subject that I contributed to the book The Empty Tomb: Jesus Beyond the Grave (2005), which answers most objections anyone might have raised against my case in the UCLA debate (since there was too little time to present all the relevant evidence there), while any others I probably address in a FAQ for the The Empty Tomb chapter on this theory: Spiritual Body FAQ.

The Empty Tomb: Jesus Beyond the Grave

Contains three chapters by Richard Carrier, covering theories in great detail that the body of Jesus was stolen, misplaced, or raised only in the spirit realm.

Licona vs. Carrier: On the Resurrection of Jesus Christ

Recorded at UCLA before a crowd of half a thousand. Carrier defends his latest theories of how Christianity began, with slide shows and new evidence from the Bible.