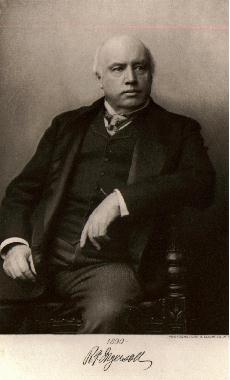 You may order books by Robert Ingersoll here

The Destroyer of weeds, thistles and thorns is a benefactor,

whether he soweth grain or not.

A WOMAN WITHOUT SUPERSTITION,

In presenting to the public this edition of the late Robert G. Ingersoll’s works, it has been the aim of the publisher to make it worthy of the author and a pleasure to his friends and admirers.  No one can be more conscious than he of the magnitude of the task undertaken, or more keenly feel how far short it must fall of adequate accomplishment.

When it is remembered that countless utterances of the author were never caught from his eloquent lips, it is matter for congratulation that so much has been preserved.  The authorized addresses, arguments and articles that have already appeared in print and passed the review of the author’s more or less careful inspection, will be readily recognized as accurate and complete; but in this latest and fullest compilation are many emanations from his heart and brain that have never had his scrutiny, were not revised by him, and that yet, by general judgment, should not be lost to the world.

These unedited sundries consist of fragments of speeches and incompleted articles discovered amongst the author’s literary remains and for unknown reasons left in more or less unfinished form.  It has been the publisher’s ambition to gather these fugitive pieces and place them in this edition by the side of the saved treasures.  Whether the work has been well or ill done a generous public must decide, while the sole responsibility must rest with, as it has been assumed by, the publisher.

In carrying out the design of the present edition, the publisher gratefully acknowledges the assistance of Mr. Ingersoll’s family, who have freely placed at his disposal many papers, inscriptions, monographs, memoranda and pages of valuable material.

Recognition is also here made of the kind courtesy of the press and of publishers of magazines who have generously permitted the publication of articles originally written for them.

Finally, the publisher gives his thanks to all the devoted friends of the author who in many ways, by suggestion and unselfish labor, have aided in getting out this work.  Of these, none have been more unremitting in service, and to none is the publisher more indebted, than to Mr. I. Newton Baker, Mr. Ingersoll’s former private secretary, to Dr. Edgar C. Beall, and to Mr. George E. Macdonald for the fine Tables of Contents and the very valuable Index to this edition.

An Honest God is the Noblest Work of Man

The Universe is Governed by Law

With His Name Left Out, The History of Liberty Cannot be Written

“His Soul Was Like a Star and Dwelt Apart”

Liberty, A Word Without Which All Other Words Are Vain

About Farming In Illinois

To Plow is to Pray – To Plant is to Prophecy, and the Harvest Answers and Fullfils

What Must We Do To Be Saved?

“The Nuremberg Man Was Operated by a Combination of Pipes and Levers, and Though He Could Breathe and Digest Perfectly, and Even Reason as Well as Most Theologians, Was Made of Nothing But Wood and Leather.”