Salisbury asks why so many Christians are experiencing extreme difficulties, given Jesus' promise that prayers would be answered (Mt. 7:7).


Nov 24: Must a Freethinker Be a Nontheist?

Quoting Bertrand Russell, Lowder argues that theists can be freethinkers and that not all nontheists are freethinkers.

Given the urgent need of the community to salvage meaning from a largely meaningless tragedy, it's no surprise that the myth of Cassie Bernall's "martyrdom" was so eagerly embraced. But perhaps in times of crisis there is no such thing as irrational behavior--there is only human behavior in the face of gunshots, screams, and certain death. Perhaps Bernall's prayer to God was merely her way of expressing her fear and anguish. Whatever her intentions in those last words, it's unlikely that she meant much more than the desperate wish to simply "go home" to safety.

Belief, Truth, and the Columbine Tragedy

The story has spread like wildfire within the Christian community: Dylan Klebold walked up to Cassie Bernall, pointed a gun at her and asked if she believed in God. When she whispered "yes," he immediately shot her in cold blood. But Jefferson County sheriff investigators have put together a different story. It seems that the alleged eyewitnesses were nowhere near Bernall while those who were saw things quite differently. What's going on here?

Violence and the Wedgwood Shooting

This woman calls into my local television station to tell us that she still believes Jesus was working during the shootings. It seems there were still 6 unused cartridges in the killer's gun. Jesus decided to save other young people over the seven killed, by having the gunman blow his brains out, so we really ought to praise God for his intervention. Say what?

Sep. 8: The BSA and Civil Rights

A judge must balance the dictates of the Establishment Clause with public accommodations laws. Why do nonconformists always seem to lose?

Organizers of the Reconciliation Walk seek atonement for the past atrocities of the church, notably the inquisition and the witch hunts. Those Christians engaged in reconciliation should be applauded for their efforts and encouraged to continue to examine the role of the church in history. However, some apologists have the notion that humanity should forgive and then quickly forget the atrocities committed by the church. Instead of coming out and just admitting that the Church has committed past wrongs and to pledge that it will never happen again, the apologists instead make excuses for the lack of divine governance during these tragic escapades. [Go to the full story.]

July 22: Was Hitler an Atheist or a Theist? More Importantly, Who Cares?

Vuletic argues that theists and atheists often get too caught up in a pointless debate over the metaphysical leanings of despotic historical figures. "Suppose Hitler was an atheist," Vuletic points out, "what implications follow for atheism as a whole? None." Theists and atheists who spend their time trying to denounce the other side by arguing that "tyrant W was an atheist," or "racist murderer X was a theist," are typically engaging in a classic act of bigotry -- the demonization of an entire class of highly varied people on the basis of the actions of a few extremists. In the process, they insult and polarize the good people on each side, and trivialize the comparatively minor, yet still dangerous, elements within. [Go to the full story.]

My wife and I have three daughters, ages 12, 10, and 6. Since the day they were born we have raised them without religion. Recently, another family moved in with our neighbor. They had three children similar in age to my daughters. One nice warm spring evening here in Colorado the children were all playing together outside. Just before the children were called to come inside and get ready for bed, the six year old son of the missionary wannabe family told my ten year old daughter, "You know what? You guys are nice enough to be Christians!" [Go to the full story.]

The controversy over practicing Wicca on military bases has expanded far beyond just one Congressman who can't understand the Constitution. Now, 13 groups affiliated with the Radical Religious Right have called for a boycott on enlistments and reenlistments in the Army until the practices of Wicca and Satanism are prohibited by the Army. Would that be allowed under the First Amendment to our Constitution?

[Click here to read an in-depth article on how this fits within our Constitutional framework.]

By James A. Haught

Some conserative religious groups have criticized the U.S. military's decision to support Wiccan soldiers who wish to practice witchcraft. But can the U.S. military support one religion while not supporting others?

May 2: Resurrection of the Flag Desecration Amendment

Congress recently resurrected by a margin of 11-7 in the Senate Judiciary Committee the Flag Desecration Amendment. It now moves on to the full U.S. Senate. The Amendment would substantially weakened the First Amendment by allowing branches of government to punish the physical desecration of one's personally owned replica of the American flag. This proposed amendment is particularly egregious because, in addition to gutting a core principle of First Amendment jurisprudence on the free speech, it also threatens the chruch/state separation clauses of the First Amendment. Since this amendment seeks to prohibit desecration, it is essentially a blashpemy law. Desecration is a religious term that applies only when something is deemed sacred. This amendment thus violates the fundamental tenets of a secular society by formally transforming a secular symbol into something sacred. 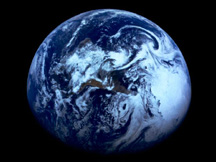 April 16: No Room for God in a Universe Teeming With Life

A spate of recent astronomical discoveries has led to the conclusion that our solar system is not unique in the universe. We're now finding, as physicist and theorist Carl Sagan predicted twenty years ago, that there are planets in orbit about other stars. San Francisco State astronomers Geoffrey Marcy and Paul Butler alone have discovered twelve planets outside of our solar system. It seems that planet formation is not as improbable as it was once thought. As we learn more about the existence of other planets, and possibly life on those planets, our quaint notions of Creation along with our hubris of thinking of ourselves as being the center of the universe, will become abandoned to the history of superstition.

A recently-circulated position paper of The Center for the Renewal of Science & Culture (CSRC) reveals an ambitious plan to replace the current naturalistic methodology of science with a theistic alternative called "intelligent design."

The CSRC, a program launched by the Discovery Institute in 1996, is the major force behind recent advances in the intelligent design movement. The Center is directed by Discovery Senior Fellow Dr. Stephen Meyer, Associate Professor of Philosophy at Whitworth College. Its mission is "to replace materialism and its destructive cultural legacies with a positive scientific alternative." The Discovery Institute hopes that intelligent design will be the usurper that finally dethrones the theory of evolution.